ROSEAU, Dominica, CMC – Opposition Leader Lennox Linton Friday voted early in the Roseau North constituency as light showers forced many voters to scramble for umbrellas as they waited in line to cast their ballots. 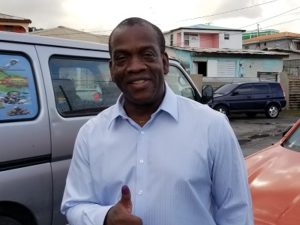 “These are showers of blessing. Voting Day in Dominica. Voting day when the people of Dominica will make the change necessary for development,” Linton said in a brief statement to the Caribbean media Corporation (CMC).

Linton, who represented the northern village of Marigot in the last parliament, is also confident of victory.

The weather forecast calls for intermittent showers, and the Electoral Commission said that 74, 895 persons are eligible to cast ballots at the 255 polling stations across the country and that polling stations opened at 7.00 am(local time) and will close 10 hours later.

Prime Minister Roosevelt Skerrit, is expected to cast his ballot in the village Vielle Case on the north coast of the island later on Friday.

Skerrit, 47, who is seeking an unperfected fourth consecutive term in office, has represented the constituency since 2000, becoming prime minister four years later.

The election is a straight a straight contest between the ruling Dominica Labour Party (DLP) and the main opposition United Workers Party (UWP) for control of the 21 seat Parliament.

In the last general election, the DLP won 15 of the 21 seats with the remainder going to the UWP.