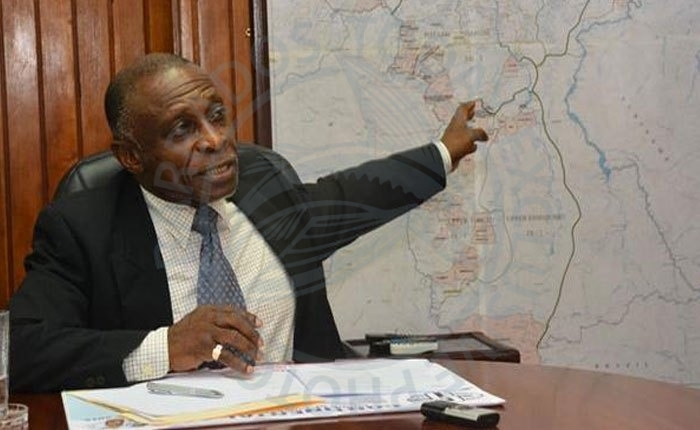 CMC – Guyana has reiterated its position that the Norwegian ship hired by ExxonMobil was “intercepted” by a Venezuelan naval vessel and brushed aside a claim by Caracas that the vessel had been operating in its territorial waters.

Foreign Affairs Minister Carl Greenidge, speaking at a symposium that focused on the continuous incursion into the country’s territory, described the claim made by Venezuela’s Vice President Delcy Rodriguez earlier this week as “absurd”.

Rodriquez had showed off what she said was concrete evidence contradicting Guyana’s version in the case of the two ExxonMobil vessels in the Esequibo area that occurred late last month.

She said that Guyana had allowed the ExxonMobil ships to enter into Venezuelan waters, describing the incident as a very serious event and a provocation.

She showed off documentation indicating that the ships were not in fact in the disputed area of Esequiba, the lines of which were settled via the Geneva Conventions of 1966.

But Greenidge said that he had seen the recent reports in the Venezuelan media and noted there are no disputes of the coordinates of where the seismic vessels were.

“In the Venezuelan press, they are publicizing the exchange between the two captains. You will hear the Venezuelan asking the Norwegian their location, we don’t have any disputes about the coordinates. They are exactly where the Venezuelans said they are, but it is in the middle of Guyana’s EEZ (Exclusive Economic Zone).”

The vessel, Ramford Tetys, was intercepted in the EEZ and Continental Shelf of Guyana at an “approximate distance of 140 kilometres from the nearest point to the provisional equidistant line with Venezuela and some 250 kilometres from Punta Playa, the westernmost point on the land border of Guyana,” Greenidge said.

Greenidge said that Guyana has the sovereignty to issue licences for the 200 miles in that area.

On December 22, 2018, the Venezuelan navy attempted to land a helicopter on board the Norwegian flagged vessel which was performing exploratory seismic operations in the Stabroek block on behalf of ExxonMobil.

The Foreign Minister said that Guyana has nothing to worry about as he responded to the announcement by Caracas that it will be remapping to show ownership of lands and maritime boundaries.

He said Venezuela, as anyone else, can create and produce maps, however, in the case of Venezuela specifically, any move to own Guyana’s natural reserves currently being disputed by the Spanish speaking nation, will be deemed illegal and will not be recognised.

“You cannot change a map showing your boundaries then try to convince the rest of the world that those boundaries are legally sanctioned,” said Greenidge, adding that for “remapping” to be recognised, all parties involved would have to agree.

“No new boundaries for Guyana or Venezuela have been legally sanctioned,” Greenidge said, adding that Georgetown continues to observe Venezuela’s actions and rhetoric.

Greenidge said the government is also pleased with the progress of its case before the International Court of Justice (ICJ) and anticipates the reaffirmation of the validity of the 1899 Arbitral Award.

Venezuela has claimed the mineral-rich region west of the Essequibo river in Guyana as its own since the 19th century, a view shared even by some of Maduro’s fiercest opponents. An international tribunal ruled in 1899 that the area formed part of Guyana, which at the time was a British colony. The swath of disputed land makes up 40 per cent of Guyana. LIAT cancels flights due to withdrawal of aircraft

LIAT wishes to advise that one of its aircraft has been withdrawn from service due to an incident at one of its stations. The...

SOURCE: Jamaica Gleaner — The Caribbean Development Bank, CDB, will be backing a study on regional airlift amid early... (Source: Jamaica Observer) — JAMAICAN sprint legend Usain Bolt is staring at a wipeout of his heavy investment at... SOURCE: CMC — The United States (US) Coast Guard says that crews patrolling the Florida Straits and Windward and Mona... Sustainable water manufacturer has expansion plans for region and beyond

By Marlon Madden Just off Highway 3 in Walkes Spring, St Thomas is a company that specialises in producing and bottling water... Interim West Indies coach Andre Coley insists he is eager to embrace the challenge of coaching the regional cricket team,...