Rihanna, Mark Wahlberg And 18 Other Celebs Who Love To Vacation In Barbados - Barbados Today

Home / World / Rihanna, Mark Wahlberg And 18 Other Celebs Who Love To Vacation In Barbados Rihanna, Mark Wahlberg And 18 Other Celebs Who Love To Vacation In Barbados
- by Barbados Today January 6, 2020

(SOURCE: The Travel) -Rihanna definitely doesn’t have to go back to her home country of Barbados. In fact, nobody has to. But the uber-famous popstar returns her eastern Caribbean island because she loves it. And she’s not the only major star who flies down.

Mark Wahlberg, Justin Bieber, and Oprah can all be spotted flying down in first-class. Or, more than likely, private. Even Andrew Llyod Webber has been seen down there. But maybe that’s because he wanted to escape all the negative press for the Cats movie.

Without further ado, here are Rihanna, Mark Wahlberg, and 18 other celebs who love to vacation in Barbados.

RIHANNA JETSKIS ALL THE WAY BACK TO BARBADOS… ACTUALLY, SHE FLIES PRIVATE… BUT WHATEVER 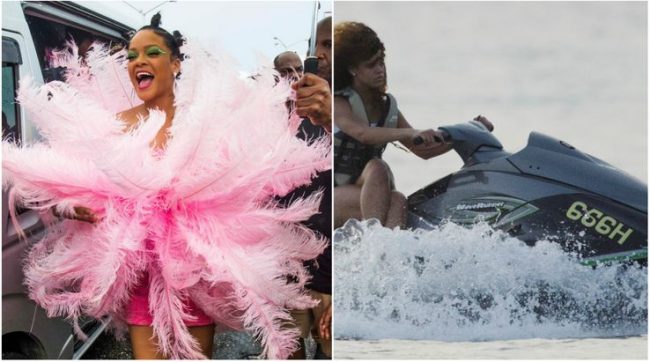 Rihanna was born in Barbados, making her the biggest celebrity from the island. But instead of being “too big” for her roots, Rihanna often shares her love for it. Nearly every year, Rihanna returns to spend time with her family, stay at her property, and just spread the love like when she was apart of the Kadooment Day Parade in Bridgetown, Barbados.

MARK WAHLBERG FLEXES EVERY CHANCE HE GETS ON THOSE BARBADOS BEACHES According to Just Jared, there’s seldom a year where The Departed and Ted star doesn’t take his family to Barbados. Mark just loves it. Here he is this past December showing off his ridiculous body. It should be said that the 48-year-old Oscar-nominated actor did step away from gloating to spend time with his wife and kids. Between the Age of Selena and the Age of Hailey, Justin Bieber managed to squeeze in a holiday to Barbados. He was spotted showing off his bod while strolling down a beach in Bridgetown in 2016. Of course, he was swarmed by young women eager to win his attention. Knowing Justin, we’re sure he gave them exactly what they wanted. Mega-celeb Ludacris made it out to North Point in Barbados in November 2017, according to Galuxsee. The picturesque spot is the northernmost point of Barbados. He sat beside the waters off Saint Hames Paris and had a “religious” experience. Whether your religion is religion or whether it’s science and nature, chances are North Point will make you feel mighty close to it. 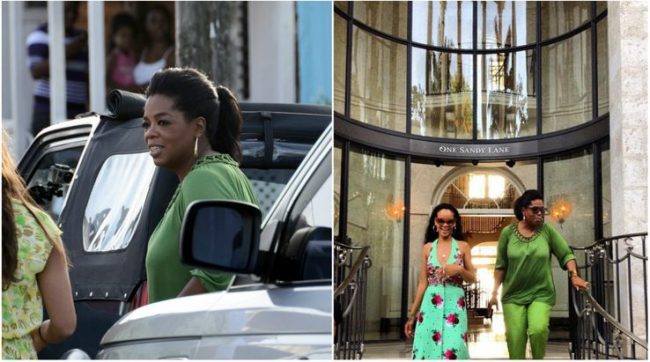 For an interview with Rihanna, legendary talk-show host and philanthropist Oprah Winfrey took a luxurious trip down to Barbados. While there, she and Rihanna rode around in a jeep that took them past the locations of many of Rihanna’s most cherished memories. The recorded interview aired in August 2012 on OWN. Contrary to Hayden Christensen’s line in Attack of the Clones, he actually likes sand quite a lot. At least, it appeared as though he did when he and his then-girlfriend flew to Barbados a few years ago. According to Just Jared, he and The OC‘s Rachel Bilson enjoyed their time on the Caribbean island with a bunch of their friends and family. Here’s model and Paper Towns actor Cara Delevingne kicking a ball around while enjoying the beaches of Barbados. According to Just Jared, Cara also debuted some new tattoos while on vacation with her family in 2013. The words “Don’t Worry Be Happy” from the 1988 song from Bobby McFerrin can be seen below her bright red bikini top. Who wouldn’t want Academy Award-nominee and famed-musician Hailee Steinfeld as a resident of their country? She’s easily one of the most strikingly beautiful and talented young women in the industry today. Here she is after the CHUM FM Breakfast Concert in 2016. According to Just Jared, the gorgeous brunette got into the party spirit while celebrating in Barbados. The opportunity of seeing Suki Waterhouse in a bikini up close is enough to get many people wanting to book a ticket to Barbados. According to Just Jared, the model from England adores the island. Here she is showing off her flawless figure in 2015 while playing around with her family on the beach.

DAVID DUCHOVNY’S NO LONGER INTO CALIFORNICATION, HE PREFERS THE CARIBBEAN X-Files and Californication star David Duchovny was spotted in Barbados in December 2018. Just Jared claims he was down there hanging out with his family and a couple of friends. He spent the Christmas break down there with his two kids, Madelaine and Kyd. He even took to his social media to show off his Christmas kilt. It’s pretty easy to dislike Simon Cowell. After all, he’s been in the news for running afoul people like Gabrielle Union, Howard Stern, and the ex of his love Lauren Silverman. But we have to admit that he appeared in his element while celebrating Christmas in Barbados. According to Just Jared, the AGT and former Idol judge event went jet skiing while showing off his 60-year-old bod. We think acclaimed British boxer Anthony Joshua deserves a belt for his Barbados-game. Even the Daily Mail commented on how ripped he looked while vacationing on the Caribbean island in December 2019. Anthony seemed to know this as he exited the clear blue water with the extreme confidence of an adonis. According to Just Jared, Heroes and Nashville star Hayden Panettiere left Barbados in 2018 sporting an injury she sustained while on vacation with her then-husband. She and her baby-daddy, professional boxer Wladimir Klitschko, took their daughter Kaya to the Caribbean island for a bit of a break. Unfortunately, the trip wasn’t all peaches and cream for the starlet.

Even though composer and playwright Andrew Llyod Webber isn’t responsible for the Cats adaptation, he must have felt some of the negative reactions. After all, he is responsible for the film’s music. According to Just Jared, the 71-year-old icon was spotted with his wife in Bridgetown, Barbados right after the film opened. There’s no doubt that Pirates of the Caribbean star Naomi Harris felt more connected to her witch character from the movies while hanging in Bridgetown, Barbados. According to Just Jared, the gorgeous James Bond actor was spotted showing off her fit figure while soaking up the warm Caribbean sun on one of Bridgetown’s most beautiful beaches. In March 2018, Glee star Kevin McHale was spotted showing off his bod in Barbados. According to Galuxsee, the actor was deep into a book, which he claimed was his favorite wat of being “anti-social.” But when you’re on holiday, you have every right to lay back on your own with some literature. We have no clue what he was reading, but we’re sure it was more entertaining than Glee. Before she briefly stole Leonardo DiCaprio’s heart, Sports Illustrated Swimsuit model Nina Agdal was spotted in Barbados. According to Just Jared, the absurdly gorgeous blond was vacationing with Max Geroge, the lead singer of The Wanted. The two were taken on a spearfishing excursion as well as hit every beach they could.

GERARD BUTLER: THIS. IS. BARBADOS! Okay, so 300 star Gerard Butler was a little less intense in Barbados than he was in the film. But one tends to relax when on holiday in Barbados. According to Just Jared, the acclaimed actor was on vacation there in 2010. He spent most of his time on the west coast of the island where he attracted a gorgeous brunette. J-Lo’s former husband and baby-daddy Marc Anthony was spotted in the Bahamas in 2013. The acclaimed Latin popstar was seen holding hands with then-girlfriend Chloe Green, according to Just Jared. He spent New Year’s on the tropical island with his love and her father, Philip Green, who is the CEO of the Arcadia Group. According to Just Jared, Empire star Bryshere Gray rung in 2016 in style. He traveled to Barbados and hung out on a massive yacht with his friends off the coast of the island. He was seen jet skiing, laying on the beach, and swimming in the bathtub-warm waters. Essentially, he earned boss-status on the beautiful Caribbean island. The National Cultural Foundation has hosted a series of events all geared toward celebrating who we are as a people through...