Declaring that he is not a “yard boy”, former Barbados Labour Party (BLP) minister Anthony Wood has charged that there is “an element of despotic leadership” in the current administration.

Addressing a Democratic Labour Party (DLP) political meeting at Newbury, St George last night, in support of Floyd Reifer who will be carrying the DLP’s flag in next month’s by-election in St George North, Wood said things were happening in the BLP Government that must not go unchecked.

Referring to the use of the word “despot” by the now late former Prime Minister Professor Owen Arthur to describe Mottley back in 2013, Wood said: “I am concerned that Mottley in her head… thinks she is tightening the vice gripes over Barbadians’ minds and our actions. I am concerned that there is a manifestation of despotic leadership that, if we allow it to go unchecked, we are going to be extremely sorry.”

Repeatedly saying that he is an independent member of society, the former St Philip South MP said that between April 19 and May 24 he wrote “a series of emails” to Prime Minister Mottley.

Wood, who was the BLP’s deputy campaign manager in the 2018 general election, said that since those polls he had concerns about the governance of the country. He said he was promised meetings on three different occasions, but none ever materialised.

“This boy will not be any boy in the yard for Mottley or anybody, because this boy has come too far, used the educational system extremely well, and made a significant contribution to the shaping and development of public policy under Owen Arthur, and I thank him for that. But this fellow will not be a boy in the yard for anybody at all. My mind is too independent, I am too fierce, I am too brave and I am too open. So once she feels, as some of them on the other side tell me, ‘Mottley is everything’, she is everything for them but she ain’t everything for me,” Wood said.

Pointing to what he said was evidence of the charges he had leveled, the economist and lecturer contended that the Prime Minister “aimed to force a savings plan on civil servants, a prelude to the BOSS programme. When she said it is a forced savings plan, I said to myself ‘I did the right thing to leave the Barbados Labour Party’… because I cannot understand a woman could be so forward and could be so brutal to think that she can determine better than the civil servants who work for the money how they should save their money. If that is not intrusion into the minds of people, I do not know what it is.”

He continued: “When she got the pushback, it moved from a forced savings plan to an optional savings plan. That is how you deal with people’s business. If you want people to cooperate with you and yield some of their current income, you negotiate with them. But you can’t come and ram down people’s throat as she thinks she has a God-given right to do with Barbadians; trying to give expression to a master leadership style instead of a servant leadership style and giving manifestations regularly to the practise of despotic leadership.”

Wood said he was also “extremely concerned” about the treatment of people within the BLP and the Cabinet.

He accused Mottley of “publicly humiliating” stalwart George Payne, Trevor Prescod, Lucille Moe, Edmund Hinkson and Neil Rowe. He also claimed that Gline Clarke was asked to step aside in the 2018 polls but he refused and after winning his seat, was not assigned a ministry even though he has a wealth of knowledge and experience.

Wood said even former BLP member Caswell Franklyn was subject to Mottley’s wrath when she spoke recently about the money the party had given him when he fell on hard times.

“We need to rise up and send a message to Mottley and the BLP that St George North, by voting for Floyd Reifer, is sending the signal and putting Barbados on a trajectory that we will not stand for any breaches of good governance practices in Barbados,” Wood declared. (IMC) Nurse on the Right Path

By Morissa Lindsay The Barbados Youth Advance Corps (BYAC) is highly touted as a saviour for one of Barbados’ most talented... By Anesta Henry If someone had told Kerry Skeete a few weeks ago that her 15-year-old daughter Kerrisha Skeete would be doing... Those who excelled in the National Cultural Foundation (NCF) Film and Video competitions have been  formally presented with... Warning of spike in COVID-19 cases

Barbadians are being warned to expect another surge in COVID-19 cases. Joint Coordinator of the National Vaccination... 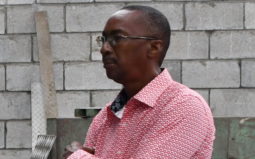 The Alliance Owners of Public Transport (AOPT) is calling for emergency talks with Government over the poor state of the...