#BTEditorial - We either stick together or fall apart - Barbados Today

Home / CARICOM / #BTEditorial – We either stick together or fall apart #BTEditorial – We either stick together or fall apart
- by Barbados Today June 2, 2022

There are times when the Caribbean’s demonstration of unity, particularly among members of the Caribbean Community (CARICOM), is admirable.

Examples of the cooperation and agreement occur on several levels. We have spoken with one voice on the need to end the unconscionable United States of America economic embargo of our Caribbean neighbour, Cuba.

We come together to ensure that our University of the West Indies (UWI) remains one of the premiere global higher institutions of learning.

The Revised Treaty of Chaguaramas has ensured that we codified how members including Antigua and Barbuda, The Bahamas, Barbados, Belize, Dominica, Grenada, Guyana, Jamaica, Montserrat, St. Kitts and Nevis, Saint Lucia, St. Vincent and the Grenadines, Suriname, and Trinidad and Tobago will operate and treat each other in commercial and trading activity.  It also speaks to the treatment of citizens.

Despite these achievements, there are several areas that we as CARICOM citizens, remain dissatisfied with the lack of cooperation or the failure of regional institutions to live up to their mandate. By extension, the organisations’ failings reflect the failure of political leadership.

This can be observed in the demise of LIAT, for example, as it failed to get the full support it required from the many countries whose citizens it served. Too much of the LIAT burden fell on too few countries, including Barbados.

Recently, there have been some signs of cracks in the CARICOM wall. Worse yet, it appears that some countries are going off on their own flights of fancy, resulting in weakened regional positions.

In this connection, we cite the rift that has erupted over the region’s support for a candidate for Commonwealth Secretary General.

Dominica’s “candidate” Baroness Patricia Scotland has, in the Barbadian vernacular, been back-raised by Jamaica, who put forward their Foreign Affairs Minister Kamina Johnson-Smith, who is challenging Scotland for the prestigious post.

Scotland appears to be losing support and has been dogged by allegations about the operations of her office. Noteworthy, is the fact that the Caribbean has offered distinguished leadership of the Commonwealth, particularly during the tenure of Sir Shridath Ramphal of Guyana.

We are yet to hear Barbados’ position on her candidature. Will we align our vote with the Jamaican candidate or stick with Scotland?

The other source of disquiet is regional governments’ attendance at the Summit of the Americas, which is scheduled for Los Angeles, in the United States next week.

St Vincent and the Grenadines Prime Minister Dr Ralph Gonsalves is pushing hard against US demands that Cuba, Venezuela and Nicaragua not be invited to the summit.

The summit is supposed to bring together the leaders of the Organisation of American States (OAS). Cuba was an OAS member until it was removed from the body due to pressure from the US.

Cuba, however, attended the 2018 Summit of the Americas in Peru and the 2015 event in Panama. Comrade Gonsalves has been seeking a CARICOM boycott of the Summit if the three US outcast countries are not allowed to attend.

CARICOM, in this case, has been noticeably mum. Clearly, the US wants CARICOM’s support, for if members of the community boycotted the event, the political implications for US President Joe Biden would be telling, as the host president.

It was no accident that US Assistant Secretary of State, Brian Nichols was in Barbados a week ago. We suspect that among the many engagements was a push to have Barbados’ commitment to attend the Summit  next week.

Gonsalves has been forthright. Kingstown will not be attending as long as the three regional neighbours are sidelined.

“There was agreement on four principles . . . that the summit must be inclusive, no one must be excluded and that the President of the United States, the United States government, does not have the right to exclude anyone.

“That’s not his right to exclude anyone that’s to be done in the whole of the Americas, he alone can’t make that decision,” the Prime Minister stated emphatically.

Whether you agree with Gonsalves or not, one must admire his decisive stand on principle.

All is not lost, though. The recently staged CARICOM Agri-Investment Forum and Expo in Georgetown was a welcome sign that the region understands that we will either rise together or fall. The region’s citizens require a cohesive Caribbean. 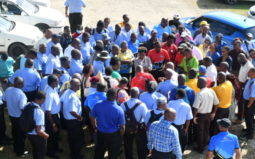