Prime Minister Mia Mottley remembers attorney-at-law and Pan-Africanist Robert “Bobby” Clarke as a “fearless fighter for the underdog; the one who would not hesitate to champion the cause of the poor or unrepresented, whether it meant a battle with the titans of business, the Government of Barbados or powerful interest elsewhere”.

The 90-year-old passed away on Saturday.

Below is the PM’s full tribute:

This afternoon, if I had been asked to describe Robert “Bobby” Clarke in just a few words, I would have to say he was “a man apart”. In any grouping, Bobby stood out — not by accident or chance, but by design. In all the years I have known him, his aim was never to just fit in.

And that is how I will always remember him — the fearless fighter for the underdog; the one who would not hesitate to champion the cause of the poor or unrepresented, whether it meant a battle with the titans of business, the Government of Barbados or powerful interest elsewhere.

Once Bobby took on a noble cause there was no doubt that he was prepared for a battle, his aim always being to make the lives of ordinary people better. In fact, it would not be inaccurate to describe his life as one of constant battles. He battled the establishment as an avowed Pan Africanist. He battled big business and Government as a tenacious trade unionist. He also took on just about everyone as a politician.

Without doubt though, anyone who had the honour of spending time with him soon came to understand that he was imbued with a commitment and passion for fairness and justice, with the protection of the dignity of the working class at the core.

When there was political turmoil in Grenada in the 1970s and 80s, Bobby was there. When he felt his voice could make a difference in the politics of Trinidad and Guyana, he made sure the world heard him. He was the consummate fighter.

While I watched in recent years as the aging process slowed him considerably, compelling him even to use a cane to assist in walking, what remained absolutely clear was that time did not dull his intellect or his tongue. The roar of Bobby Clarke’s voice, as well as his laughter, until the end, was as commanding as I recall it as a young lawyer seeing him in the magistrate’s court so many years ago.

We will miss Bobby, not just as an individual, but the ideals for which he stood — the principles by which he lived, and the fearlessness that characterised his personality.

On behalf of the Government and people of Barbados, as well as my entire family, I extend sincere condolences to all his children and the rest of the Clarke family. 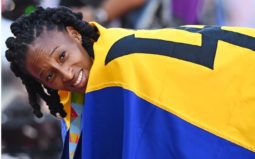 When the full list of awardees was publicly announced at the Independence Day Ceremonial Parade and National Honours Ceremony...