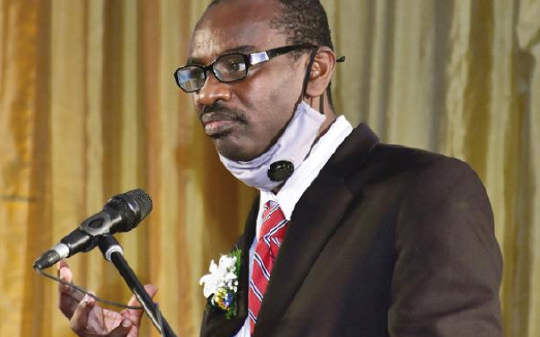 Declaring that Barbados is facing an economic crisis of “biblical proportions”, University of the West Indies (UWI) Professor of Economics Justin Robinson is predicting an economic decline of up to 17 per cent this year, based on current trends.

However, the Cave Hill Campus lecturer who studies financial crises, said there was a silver lining for the economy which has been dealt a heavy blow from the COVID-19 pandemic.

He explained that the countercyclical measures being implemented by the Government would position the economy to quickly rebound once the crisis subsided.

“The International Monetary Fund (IMF) forecasts that the economy will decline by around 11.5 per cent. So, if the IMF forecast, which is typically seen as somewhat conservative, comes through, we would have a decline that is twice the decline in 1991,” Robinson said as he addressed the recent 50th anniversary celebration of the Barbados Public Workers’ Co-operative Credit Union Ltd. (BPWCCUL) at the Hilton Resort.

The last major decline for the Barbados economy in recent history was 5.7 per cent of gross domestic product (GDP) in the 1991/1992 financial year.

“The Standard and Poor’s rating agency is predicting a decline of more in the vicinity of 15 to 17 per cent. The data trending to date suggest that the decline is going to be more of the order of the S&P decline than the IMF prediction. So, if we have, let’s say a 15 or 17 per cent decline in real GDP, we would be dealing with a decline that is almost three times the largest ever decline in our economy in our recorded history.

So, clearly Barbados and the Caribbean is facing an economic crisis of biblical proportions,” the university professor said.
However, Robinson said there was light at the end of the tunnel as he noted that the economic decline was no fault of the Government.

“In March of this year, there was nothing structurally wrong with the Barbados economy that triggered a decline in the economy. A lot of the decline is largely artificial in that there was a stop to air travel, we shut the country down, and so on. So, there is significant potential that when those artificial restrictions are removed that economic growth can rebound quite rapidly,” he explained, likening the current situation to a flu from which one can recover.

Stating that the response to the pandemic was important, Robinson said the challenge for the country was that a lot of “damage” could be done during the period of decline, such that when the opportunity to rebound presents itself, the capacity is not there.

He said it was therefore critical for Government to continue to spend on critical areas at this time to ensure some resemblance of social and economic stability.

“If the Government doesn’t do that, the risk of this artificial crisis is that if we allow enough hotels or businesses to fail during this crisis – if, or when, there is an effective COVID vaccine or some resumption of international air travel – then our ability to capitalise on that rebound would have been severely compromised because we would have lost a lot of productive capacity. So, the counter-cyclical response is an entirely appropriate one when you are facing an artificial crisis like the one we are facing,” Robinson explained. The Ministry of Maritime Affairs and the Blue Economy is about to begin repairs of berths and jetties in the Bridgetown and... Caribbean children are on the brink of an obesity and mental health emergency triggered by the COVID-19 pandemic, a group of...